Stun Guns Can Save Your Life

Read the real life testimony below! 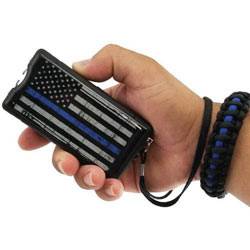 I am a full time Culinary Student at the Arts Institute of Houston (female). I was on my way to Reliant Park because I had landed a new cooking job. As I was exiting off of 610 at the Kirby exit, I blew out a tire. As I was changing it, a man approximately 6 foot, 220 pounds pulled behind my vehicle. He approached me and asked several times if I needed any help, and I repeatedly told him that I had it under control. He had alcohol on his breath and seemed to be getting annoyed with the fact that I did not need his help. At this point I was beginning to feel uneasy of his presence. He reached and grabbed my arm, prompting me to pull my stun gun out of my pocket and stuck him once in the stomach and a second time in the chest and he fell to his knees and hit the concrete, face first. While he was on the ground, I struck him again in the back of the neck. I had finished changing my tire by that time. Scared, I left the scene. I drove around the block, then decided I would at least drive back by to check on the man. As I approached, I saw a local policeman had pulled up. The man was sitting up with his head tilted back. He obviously had a bloody nose from hitting the asphalt earlier.

As of this writing I have heard nothing more from this incident. Afraid for my own safety that day, I feel the Stun Gun possibly saved my life.